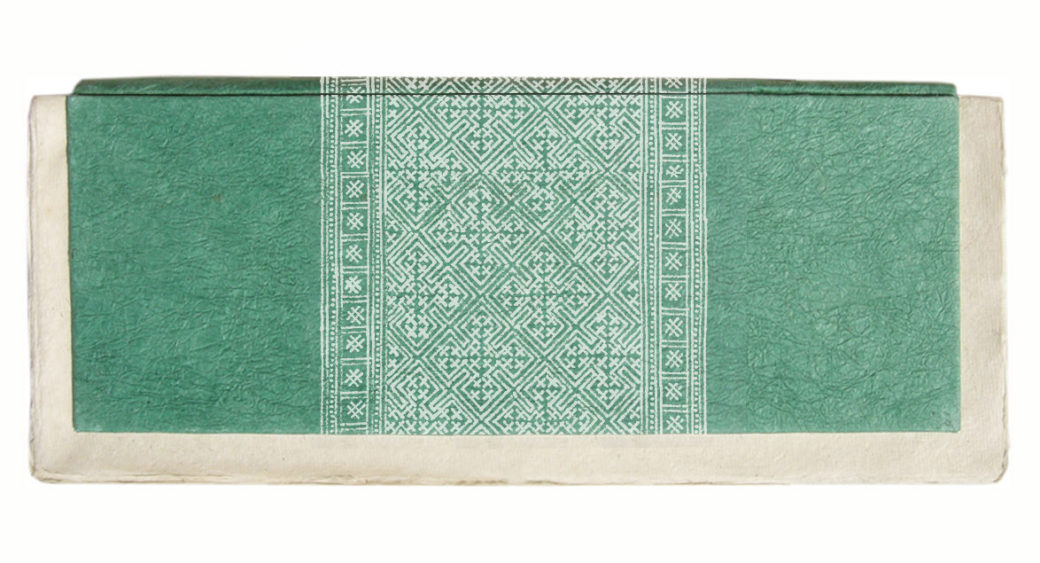 In a previous blog I shared the source of inspiration for particular patterns and designs that are used in my creations at Marina Vaptzarova. The list is extensive and here I share with you the inspiration I attained from the Golden Triangle Hmong Tribe creations; masters in textiles and refined silver jewellery. This connection that I have with the Hmong tribe stems from my appreciation of their great craftsmanship and intricate designs despite their very remote living. This hilly tribe maintains their strong culture and tradition notwithstanding their frequent migration and quest for freedom. 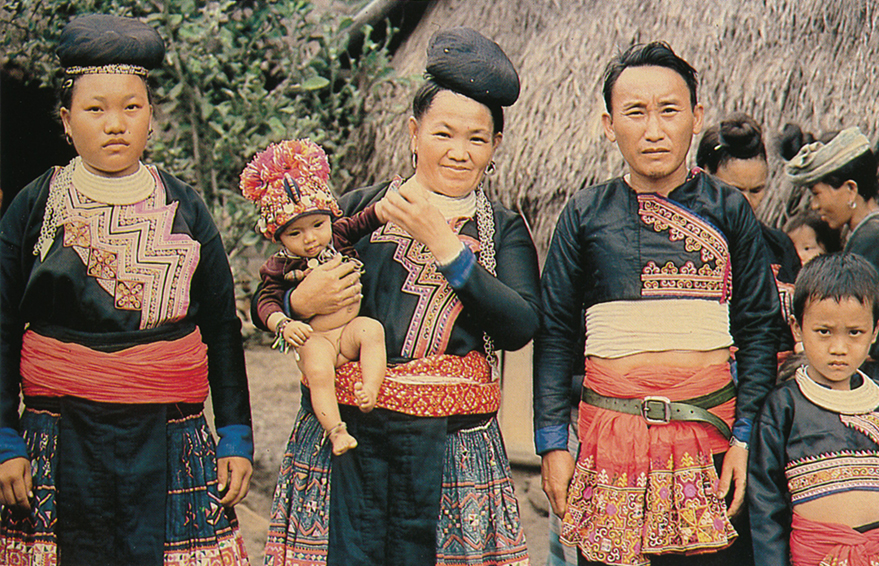 The Hmong tribe is one of many ethnic groups in the Golden Triangle; the region where the borders of Thailand, Laos and Myanmar meet at the Ruak and Mekong rivers.

Hmong legends tell that their ancestors were living in a frozen land where winters were difficult with long nights. It can therefore be assumed that they arrived in China through the highlands of Tibet, Siberia and Mongolia. The Chinese annals indicate that the Hmong may have lived along the yellow river about 3000 years ago.

The centuries long attempts at domination by the Chinese have provoked much hostility from the Hmong and led them to undertake periodic migrations in search of freedom. They have spread to a larger geographical area than other tribes because of their perpetual search for cultivable land and their desire for independence.

The Hmong tribal people that came from South West China and settled in the Golden Triangle scrape out an uncertain living with very simple and basic housing and interior. Their houses are made from easily portable materials including cane or woven bamboo. In contrast to this simplicity, they have ironically developed rich and varied craft traditions in jewellery and textiles. Jewellery to them is considered a readily negotiable currency: everything from a pig, house, opium crop or bride price is measured in silver.

Textiles are the reflection of indigenous knowledge and culture, and even more so in the Hmong tribes, where textiles are intricate part of their tradition and rituals. Some specific textiles are to be made for specific occasions as with the Hmong Batik pattern as described below.

Each hill tribe (ethnic group) from the Golden Triangle has its own distinctive and elaborate textiles, which indicate their history, ethnic identity, and individual status.

At Marina Vaptzarova, I combine sustainable materials from Nepal with patterns and designs borrowed from tribes across the world. They come together in my contemporary designs; it's a journey from one place to another, one craftsman to another. 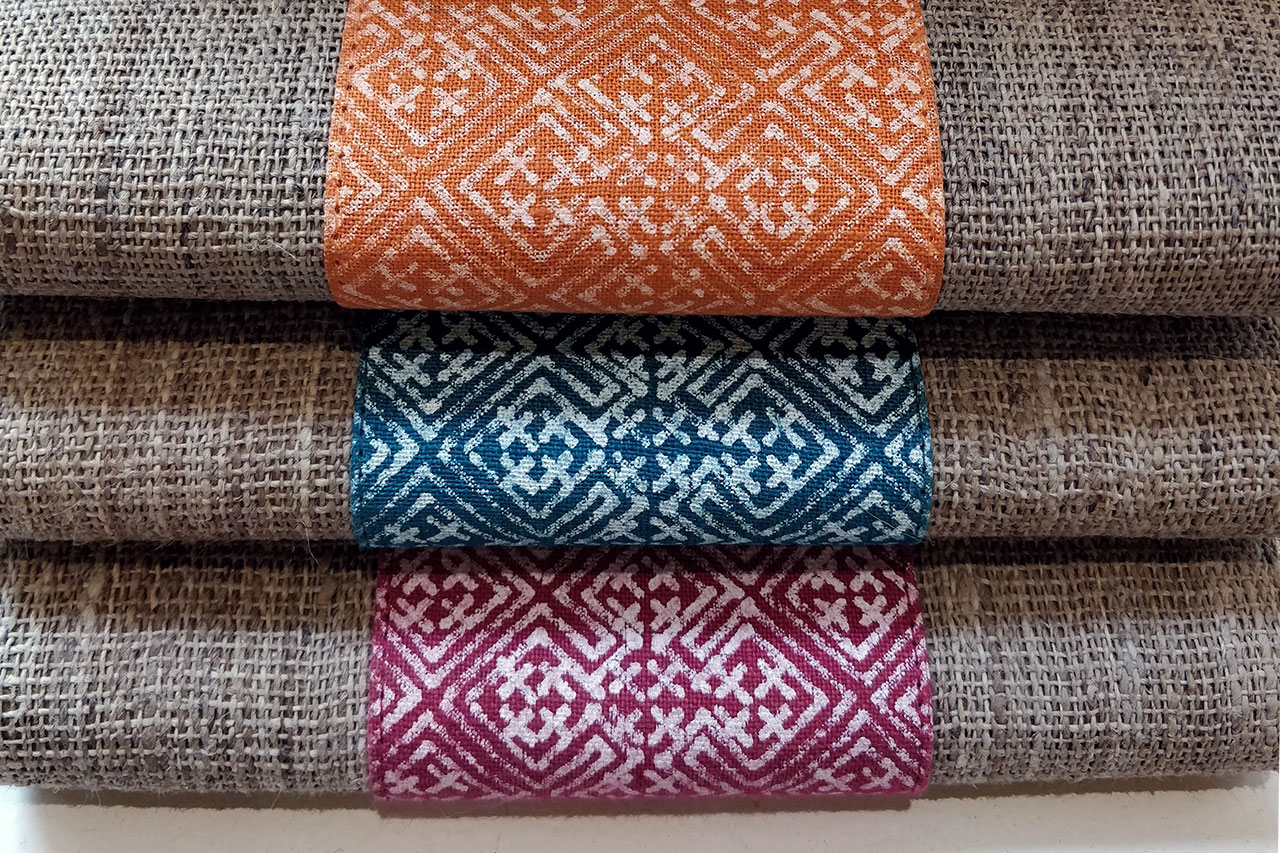 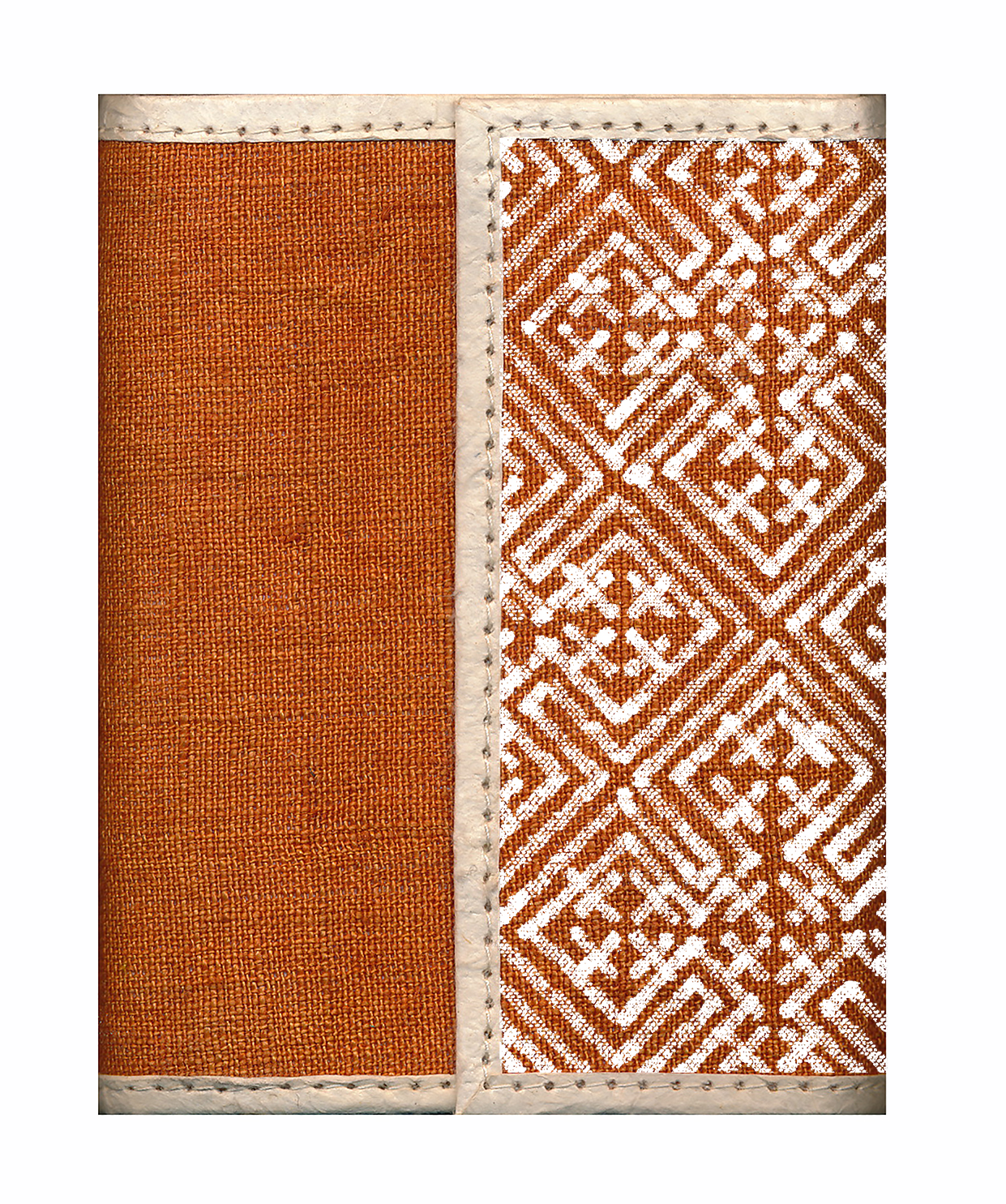 This notebook borrows the Hmong tribal pattern with a silkscreen print on linen. 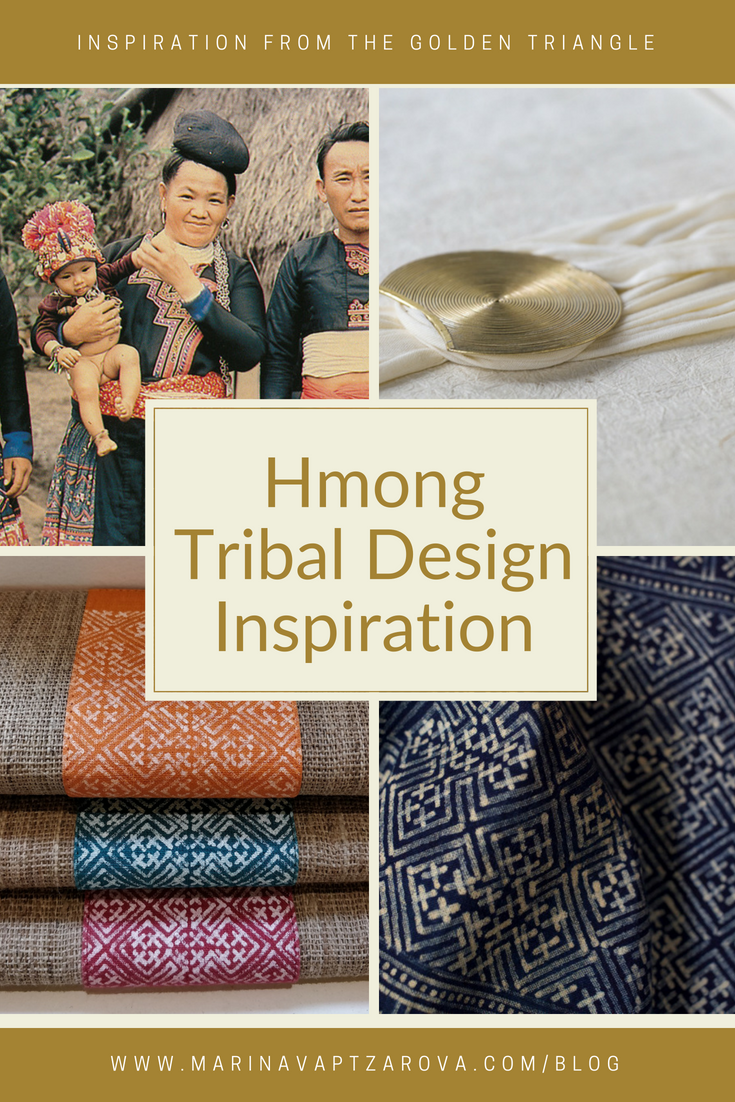 The blue Hmong women wear a short indigo batik pleaded skirt generally made of hemp. The design is drawn by hand on the woven hemp textile with bee wax and a metal tool made by the blacksmith. When the design is done, the fabric is dipped into cold indigo dye. Once the indigo has taken hold, the wax is removed by boiling the fabric. Apparently the Blue Hmong tribe are the only Golden Triangle tribe expert in batik. 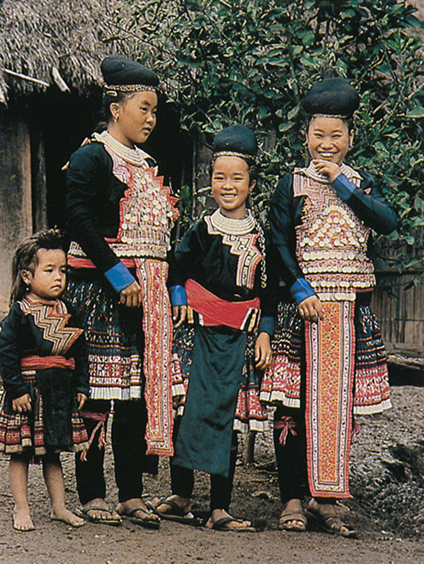 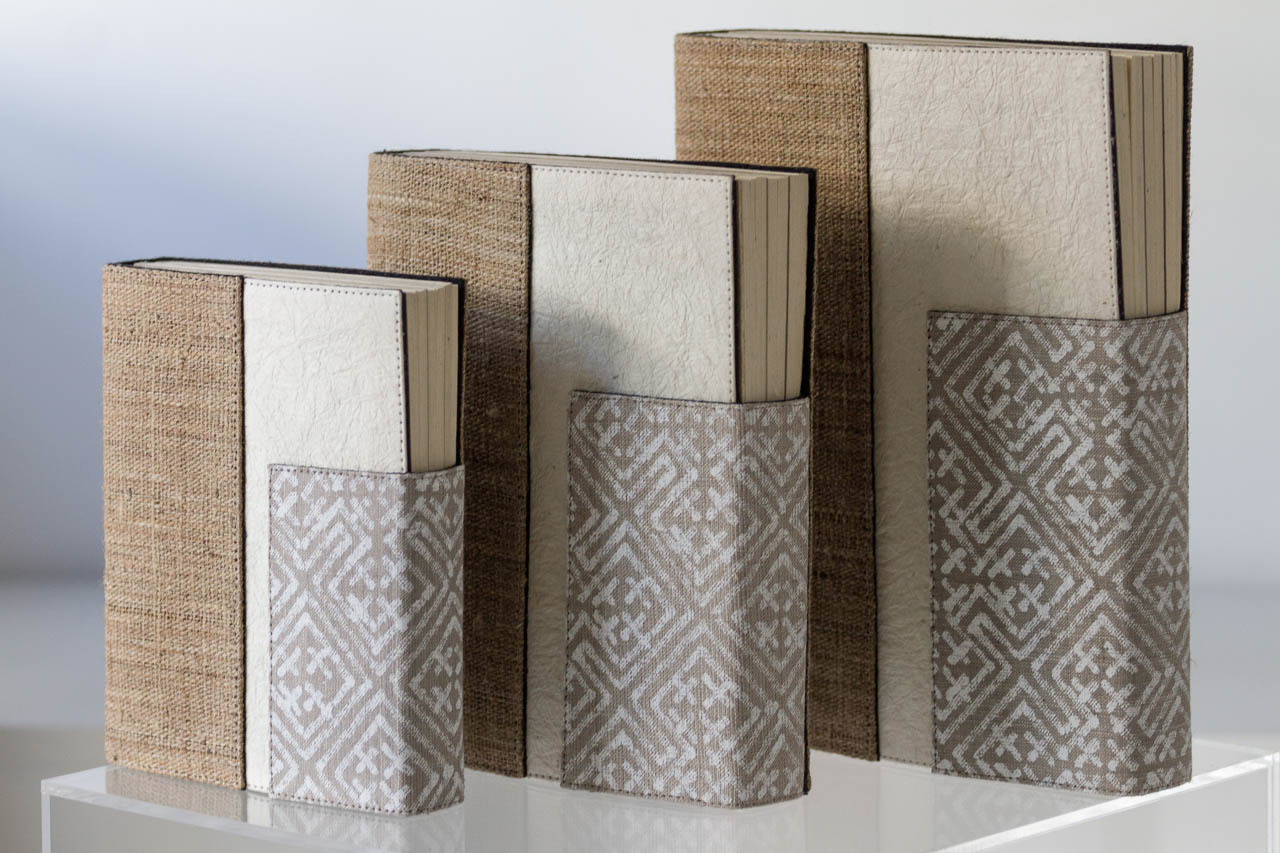 The result is beautiful; the batik technique gives irregularities in the pattern in a delicate and lively manner. I was very inspired by these patterns and by their stories. This is why I chose to incorporate this design on several of my creations.

Clothing and textiles are not only for survival, but also a link to other family members. Hmong women also use this batik pattern when making a batik hemp dress for their grandmother before she passes away. The most important item for an elder woman to carry to her next life is a hemp skirt made by her descendants.

I found the love and care behind this batik pattern really inspiring. It gives us a multi-dimensional feeling to the pattern; not only pleasing to the eye, but also connecting us to this tribe and this special bond they had between each other. 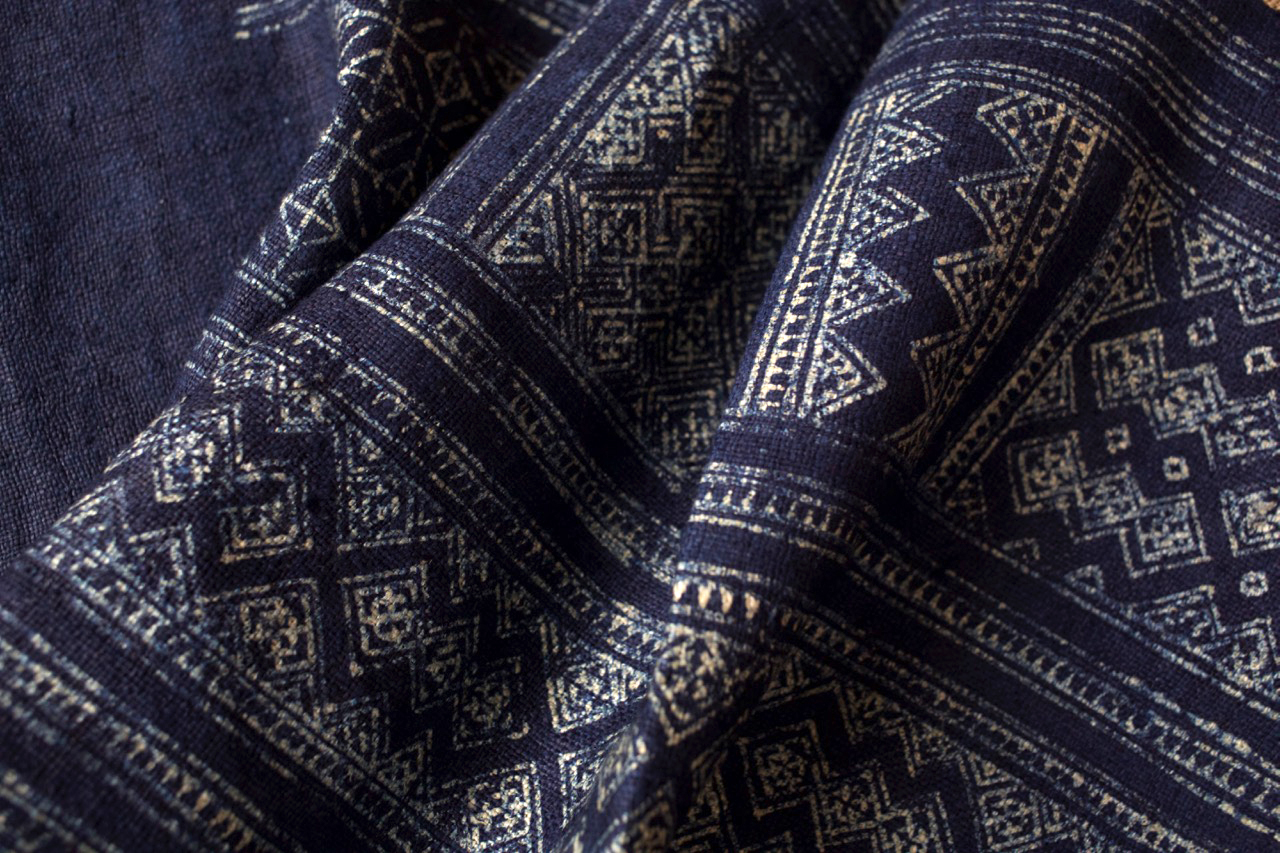 A close up of the Batik design on hemp weave cloth I picked up from Thailand which I later transposed onto my journal and accessory designs. 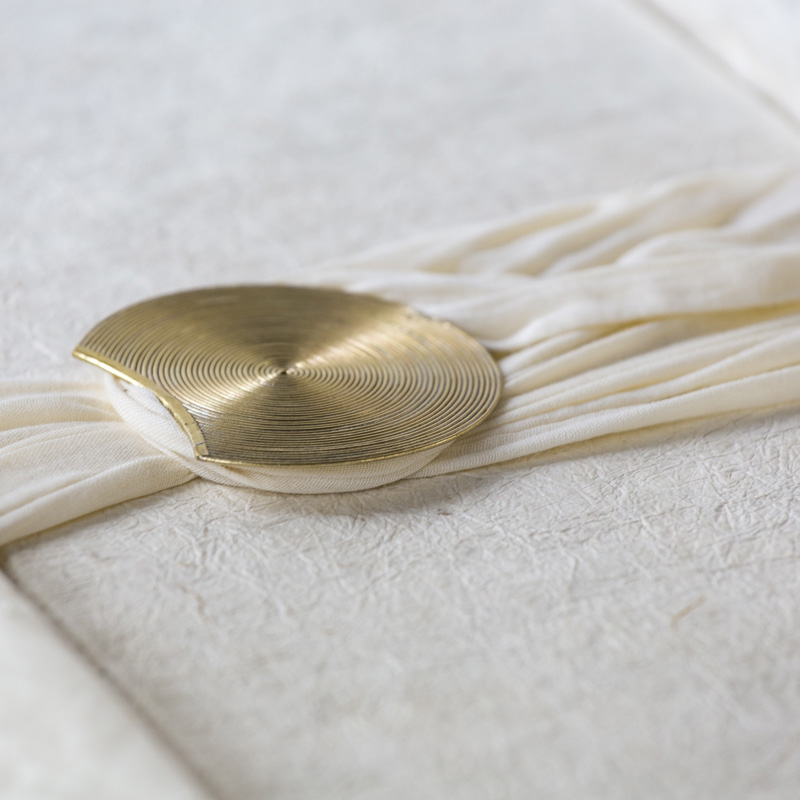 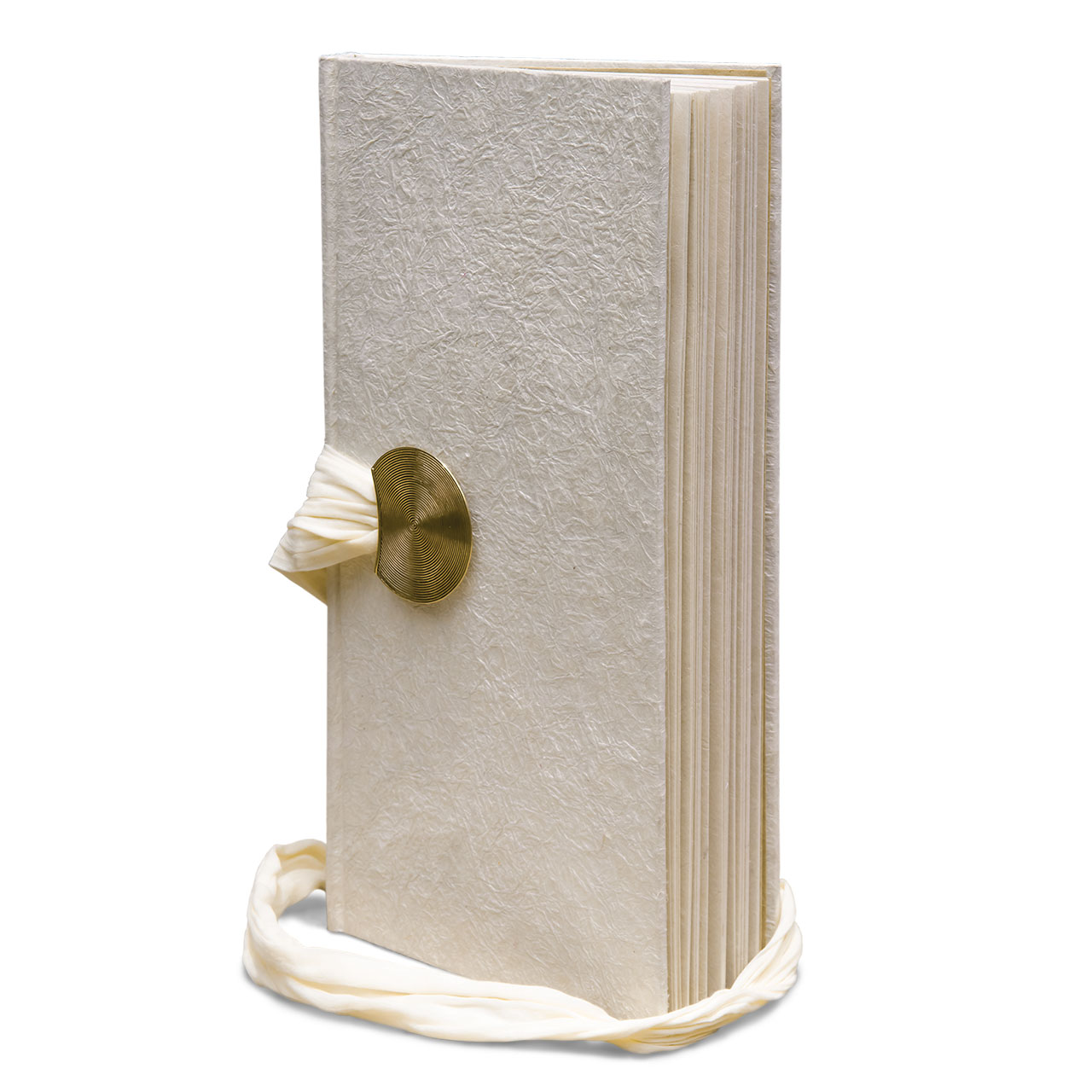 This Hmong Bridal Guestbook is covered in Daphley (vegetal leather) and adorned with a beautiful handmade brass ornament inspired by the Hmong tribe jewellery. The spiral is symbolically connected to fertility, love and marriage.

It has been meticulously hand carved by the master silversmiths of Kathmandu Valley, the Newars, a tribe renowned throughout the Himalayas for their unsurpassed craftsmanship.

A theme of migration and movement evident to the realities of the Hmong tribe is constant in this design. From the spiral Hmong design to the handmade Daphne paper made in the Himalayas, this guest book takes on a journey through the most majestic places in Asia; connecting us to various cultures and craftsmen along the way.

Hmong designs influence my creations on an emotional level. They speak to me in an authentic way. Their genuine craftsmanship connects us to a new dimension and way of living. When objects are made with such care and patience we can sense it in the final product, despite being so far away from the maker.

From Himalayan traditions to the trends of Paris Marina Vaptzarova designs celebrate a meeting of the old and the new. Marina Vaptzarova’s exquisite collections are the expression of dedicated quality and exceptional craftsmanship. The brand actively works towards maintaining a sustainable trade on an environmental, economical and social level. Marina Vaptzarova has recently been awarded the Butterfly Mark by Positive Luxury.